A mastectomy is a surgical procedure to remove the breast(s) in a patient with breast cancer. It is one of the most commonly used and effective options for treating breast cancer because it removes all traces of cancer, and reduces the risk of its recurrence.

There are several different mastectomy procedures designed to eradicate the cancer but retain as much of the natural breast as possible. Some of the most commonly used techniques include:

A subcutaneous mastectomy removes all breast tissue but leaves the skin, nipple and areola. The breast is then immediately reconstructed. This operation is performed less often than simple or total mastectomy because it leaves behind more breast tissue in which cancer can, potentially, reoccur.

The entire breast is removed during a total mastectomy. Lymph nodes are not removed unless they are a part of the tissue already being excised.

A modified radical mastectomy, in addition to removing the breast, removes lymph nodes under the arm, which are then dissected to see if the cancer has spread within the body. However, no muscles are removed from beneath the breast.

A preventive mastectomy is an elective surgery performed on women who have a high genetic or familial risk of breast cancer. Also called prophylactic mastectomy, it usually takes the form of a total or subcutaneous mastectomy, and can reduce the occurrence of breast cancer by 90 percent.

Recovery and Reconstruction After Mastectomy 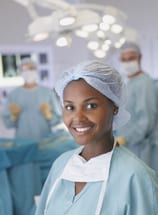 Depending on the extent of the procedure, mastectomy usually requires a one- to three-day hospital stay, but some women may be able to go home the same day. A drain, which will be removed approximately two weeks later, may be attached to the chest to collect fluid. If mastectomy and reconstruction are performed at the same time, the hospital stay will be longer.

A follow-up appointment with the surgeon usually takes place one week after the surgery. The surgeon will check that the incision is healing properly, and that no other complications have arisen.

Certain risks are associated with mastectomy, and may include:

Dr. Hou is a native Southern Californian.  She attended school in Chicago and then did her surgical residency in Ohio.  She stayed in Ohio for 2 years at a surgical oncology practice involving mainly breast cancer.  She was very

Dr. Ellyn A. Smith earned her Bachelor of Science degree, in Biochemistry and graduated from the College of Charleston, SC. After working at the Medical University of South Carolina, in antibiotic resistant bacteria, she pursued he